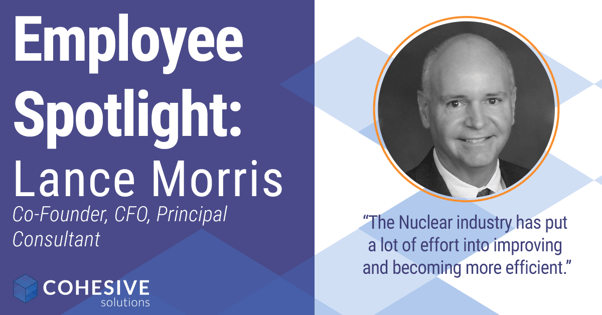 2018 brings with it a renewed focus on all things Asset Management here at Cohesive. Each month we share an employee spotlight that captures a teammate’s experience. Each one of our team members brings a caliber of commitment and skill that is unmatched by any other IBM Maximo reseller.

Lance Morris, CFO, Co-Founder and Principal Consultant of Cohesive is our January employee spotlight. Lance has over 30 years of experience as a practice leader for EAM projects and as a Maximo solution architect. Lance is often called upon for engagements involving mission critical technology initiatives for asset intensive customers. He helps guide the system selection process, reconcile commercial application functionality and shape business process requirements along with solution configuration design.

Lance was asked when and where he began his career, and what was his first project? He replied;

“I was bitten by the power generation bug as a co-op with Georgia Power at one of their largest coal fired plants. After graduation, I was a performance engineer at Duke Power’s Catawba nuclear station. As a performance engineer and surveillance coordinator, I got a very good perspective of the distinct groups and departments needed to operate the plant. I then worked for Santee Cooper in their corporate office overseeing a small group of technicians executing performance tests on the boilers, turbines and cooling towers on their system. I then entered the IT world as a Manager with Deloitte. My first project was to implement a CMMS system for the New York Power Authority’s nuclear sites, Fitzpatrick and Indian Point 3. I also worked on a project management assessment for Public Service Electric and Gas in New Jersey. During the 90’s, I worked mostly as an independent consultant with projects at Arkansas Nuclear One, Wolf Creek Nuclear, Davis Besse Nuclear, Beaver Valley Nuclear, Vogtle Nuclear and Merck Pharmaceuticals.”

It was during this phase of his career that Lance and three other partners began Cohesive Solutions. Cohesive is celebrating their 20th business anniversary this year, with Lance as one of the four standing partners.

“After the origination of Cohesive, I recall our second major project, it is one of those interesting implementations that still amazes me. This project involved applying a new supply chain system for NMC. This focused on standardizing processes and converting supply chain data for six nuclear plants from FIVE different systems and utilities in one year with the first site going live after only six months!"

Given Lance’s exposure to so many sites, we asked him to share what has changed over the years? 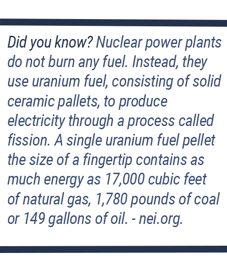 Our last question for Lance; What Nuclear topic is intriguing? What is getting easier? Or more efficient?

“The biggest disruption in the Nuclear industry has been the availability and cost of natural gas. When I started my career, natural gas was one of the most expensive fuel sources and only used for peaking. Now it is base loaded and more cost competitive than even Nuclear. The Nuclear industry is struggling again to compete on a cost basis. The original Nuclear promise was the power would be too cheap to meter and customers would just pay a flat rate for power. Now there is an industry initiative called ‘Delivering the Nuclear Promise’ (DNP). It is focused on standardizing and sharing resources across plants and utilities to cut 30% out of the current cost. The first attempt in that area is to utilize a standard design tool for evaluating and developing design changes. It will be interesting to see if the industry can deliver the DNP while still maintaining a safety conscience work environment.”

We will see change and evolution in the Nuclear sector. Like everything else there are aspects to be determined, we are fortunate to have skilled team members, like Lance Morris, steering the course.

Find me on:
LinkedIn