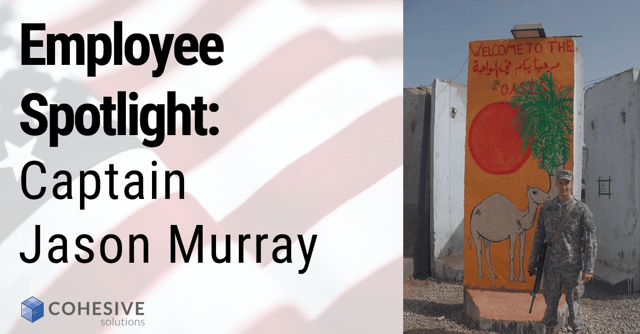 This Veteran’s Day we salute one of our very own, Jason Murray. Jason joined Cohesive Solutions just a few years ago as a Business Process Consultant.

Jason Murray has served approximately 11.5 years of service in the United States Army (half and half National Guard and Active duty). His current rank is Captain (O-3). Inspired and motivated, Jason enlisted after 9/11. He always had a desire to serve his community, state, and country but it was the events of 9/11 that really prompted him to enlist.

Jason finds commonality in being a consultant and a military leader. He states that both must find a way to accomplish their assigned missions – make it happen. In both positions he must analyze the mission requirements, design (plan) a solution, be a champion of that solution while also being flexible and adaptive to changes, and take ownership of decisions.

While there will be many missions to come, the most intriguing assignment to date was deploying to Iraq in support of the largest logistical drawdown mission since WWII. His hands-on work with local, national Iraqi vendors and engineers made the project unforgettable.

A special lesson he has learned includes working in and around a diverse team. “One of the most fulfilling aspects of the military is being able to work with people from all over the country, from ALL ethnic, religious, and socioeconomic backgrounds. This is all about learning how to be a good teammate.”

Jason is confident that his background and experiences in both the military and civilian work environment have given him a unique advantage by leveraging the best of both worlds.

Jason’s advice: My best advice to transitioning veterans, particularly those that have never had a civilian job, is to expect a drastic cultural change in the civilian job landscape. Your new coworkers may have never served, and have very little frame of reference (other than popular media) about what your experiences were like as a service member. You don’t share a common “work language” and most likely have different values and expectations when it comes to leadership. Be humble and understand that even though you may have done amazing things, you’re transitioning into an environment where those things are hard to grasp. On the flip-side, you are not an SME at whatever the solution or program may be. The schools and the training you’ve attended and the level of responsibility that came with the rank you had achieved is difficult to translate. I would also offer that the comradery is going to be different. The bonds that service members share is embedded in knowing that we each have experienced some of the same demanding situations (sweat and bled together in less than ideal environments). I would suggest finding a mentor that has successfully navigated the transition could be very valuable. This will help you reach your full potential and contribute to the new environment.

Find me on:
LinkedIn