Strategic Leadership for the Nuclear Industry 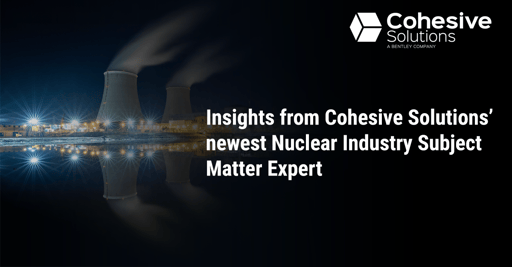 Joe Klecha is a go-to-industry leader for Nuclear Power Plant performance recovery and its with much excitement that we welcome him to the Cohesive Solutions team.

Throughout his career, he was recruited by many top nuclear organizations to fix poor performing power plants or fleets. In his previous endeavors, he brought experience, organizational leadership, and new ways of thinking to plants that needed a fresh approach to optimizing their plant performance – and we are excited for him to provide that same guidance to our nuclear clients.

A Long-Standing Passion for Nuclear

Joe brings a perspective to our nuclear clients that is unique in two ways:

Joe spent nine years in the Nuclear Navy where he earned his nuclear engineering degree as a submariner on USS Nebraska and Submarine NR-1, one of a kind deep submergence nuclear research submarines.

In 2012, Joe joined Southern Nuclear as the Work Management CFAM (Corporate Functional Area Manager), turning around the performance of equipment reliability for the nuclear fleet from worst in the industry to top quartile. In 2014, he was promoted to Initial Test Program Director to run startup and testing for Vogtle 3&4, the first new nuclear units in the United States in over 30 years. Additionally, he was called on to be the Operations Director at Vogtle 1&2 leading to a successful plant performance recovery.

Joe was recruited by Duke Power as the Fleet Operations Director in 2015, where he led the team responsible for turning operational performance of their fleet of six Nuclear Power Plants around.

Not long after, he was asked to come back to Southern Company to take a key executive role at the Vogtle 3&4 new nuclear project. Joe was responsible for the transition of the $25B project from being led by an external Architect/Engineer to being Southern Company led. During his second stint at the project he held roles as Plant Manager, Project Director, and Vice President of Operations.

Lessons Learned in the Nuclear Industry

“People, Plant, and Processes.” was the answer Joe gave when I asked how he conducted such successful assessments and revitalizations of these nuclear plants and fleets. He emphasized that poor leadership, communication, and influence were the main reasons these plants were behind in their performance – and though simple to identify, not as simple to fix.

“Leadership is always number one.” He said, “Are you building relationships? Are you teaching people? I realized that 99% of people want to come to work and do a good job.”

His observation of the challenges in the nuclear industry was that organizations consistently focus so much on being dialed into the technology, they forget the other parts of the puzzle that are equally as important – the people and processes

This understanding is why he fits right into the Cohesive Companies mission of helping our clients achieve business outcomes with industry expertise, process improvement and technology pull through.

Is the Nuclear Industry Fearful of Change?

I told Joe that through experience, my perception of the nuclear industry is that everyone is looking to their neighbor to change before they change. Here was his response.

“Many leaders are very risk averse, which is an important role in nuclear safety. However that can also be used as an excuse to stifle needed change. That is why bringing in the right leaders and making sure they understand how to gain influence is critical.” – Joe

When leaders gain influence with their teams, they help them understand the “why”, teams get excited about the vision, are empowered to do their jobs better, and help propel the organization from “status quo” to the next level.

We are excited for our team and clients to have the opportunity to learn from Joe. Cohesive Solutions is committed to delivering on The Nuclear Promise – helping nuclear organizations commit to excellence in reliability, safety and operations.

For more insights in the Nuclear industry, follow Joe on LinkedIn.